“Obfuscation as a Transgressive Practice against Data Tyranny”

Helen Nissenbaum is Professor of Media, Culture and Communication, and Computer Science, at New York 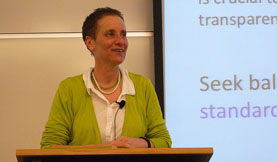 University, where she is also Director of the Information Law Institute. Her areas of expertise span social, ethical, and political implications of information technology and digital media. Nissenbaum’s research publications have appeared in journals of philosophy, politics, law, media studies, information studies, and computer science. She has written and edited four books, including Privacy in Context: Technology, Policy, and the Integrity of Social Life, which was published in 2010 by Stanford University Press. The National Science Foundation, Air Force Office of Scientific Research, Ford Foundation, U.S. Department of Homeland Security, and the U.S. Department of Health and Human Services Office of the National Coordinator have supported her work on privacy, trust online, and security, as well as several studies of values embodied in computer system design, including search engines, digital games, facial recognition technology, and health information systems.

Nissenbaum holds a Ph.D. in philosophy from Stanford University and a B.A. (Hons) from the University of the Witwatersrand. Before joining the faculty at NYU, she served as Associate Director of the Center for Human Values at Princeton University.

Suhail Malik is 2012-14 Visiting Faculty at CCS Bard, New York, and Programme Co-Director of the MFA Fine Art, Goldsmiths, London, where he holds a Readership in Critical Studies. Recent publications include: Co-editor of Realism Materialism Art and The Flood of Rights (both 2014); “The Value of Everything” in Texte zur Kunst (2014); “The Ruling Elite Have Feelings Too” in The New Reader (2014); “Ape Says No” in Red Hook Journal (2013); On the Necessity of Art’s Exit from Contemporary Art at Artists Space, NY (2013); “The Politics of Neutrality: Constructing a Global Civility” in The Human Snapshot (2013): “Tainted Love: Art’s Ethos and Capitalization” (with Andrea Phillips) in Art and Its Commercial Markets (2012); “Why Art? The Primacy of Audience” at Global Art Forum, Dubai (2011); “The Wrong of Contemporary Art: Aesthetics and Political Indeterminacy” (with Andrea Phillips) in Reading Rancière (2011); “Educations Sentimental and Unsentimental: Repositioning the Politics of Art and Education” in Red Hook Journal (2011); “Screw (Down) The Debt: Neoliberalism and the Politics of Austerity” in Mute (2010); “You Are Here” for Manifesta 8 (2010).

Sorry, no Tweets were found.